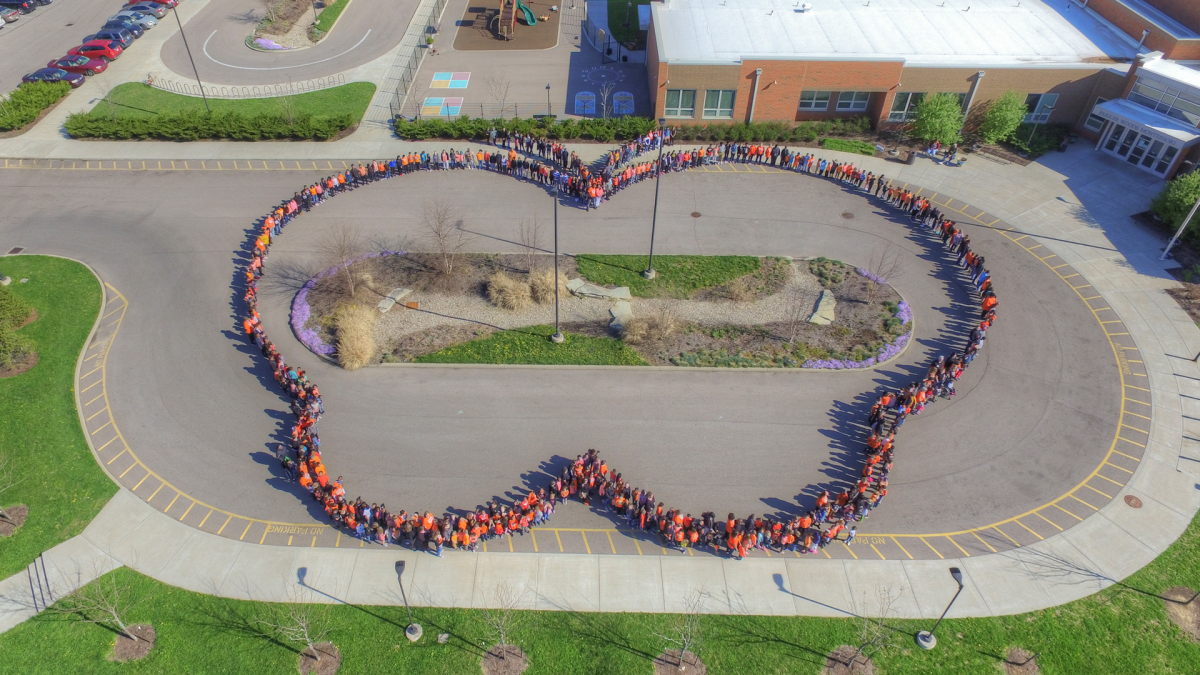 How the School Photos are made

Pictured above is a new amazing photograph. Read about the making of the monarch butterfly school photo.Below is an overview of how we made the other photographs.

I think this is a beautiful picture even though it didn’t turn out as I imagined because I didn’t correct enough for perspective, which makes the muffin top look too small. The photo was taken on St. Patrick’s Day when all the kids were wearing green. I asked everyone with a red coat to be part of the cherry. Below you can see my preparatory drawing using a satellite image of the playground and a cupcake illustration, which I then transferred to the school playground using chalk and a grid pattern. More about how the cupcake school photo was made.

I’m very surprised this picture turned out so great! Another one of my personal favorites. And a giant framed photo will soon be hanging in the school office until the end of times. It was very difficult to illustrate the chalk drawing and make it straight while accounting for perspective. It took me about 3 hours, and I was flying around the playground backwards. I was in bed with bronchitis for a week after this effort in the freezing weather.

Due to the nature of kids, we had a limited amount of time to form the picture and capture a lot of smiling faces. Of course, when you want clouds, you get sun. And, I miscalculated the morning shadows since the sun was still in the southern hemisphere rather than due east, which created too much contrast and long shadows. We solved some of these problems by having the kids sit down.

I seem to learn all these things the hard way. If life was easy, it wouldn’t be new.

First I had to do a location scout. Luckily I found a good spot on the roof overlooking the playground. Now we just had to wait for the snow to melt.

Next, I went home and planned the picture. I downloaded a satellite photo from Google Maps of the actual school and playground. Then I overlayed my drawing. It looks good so far. But now I need to try and adjust for perspective and calculate the space for the students to comfortably fill the lines.

After 3-hours of back-breaking work, the chalk outline is done. But, I’m worried because it is barely visible.

Next will begin lining up students into groups of red and blue shirts. Fortunately, the teachers are great at this. We also try to get the older kids outside first because they have the most patience. We have to get everyone in position before they go stir crazy and break formation or refuse to smile. And, we need to leave extra time for unforeseen variables.

I had no idea it was going to be this cool. From the ground it looked like organized chaos. ~ Principal Gennerman.

This is quite probably the best photograph that I ever took, which after taking pictures of world wonders, like the Sphinx and the Parthenon, means a lot.

Pictured here are the 507 illustrators of Falling Uphill at Poplar Creek Elementary School plus the staff. It took me an hour (plus planning) to illustrate the chalk outline of the bicycle (see below). I used a string and two bricks to help guide me. Luckily arranging the kids was no problem thanks to the principal and teachers. However, I still had to overcome some challenges like the partly cloudy sun and shadows. The kids constantly jumping up and down. Not falling off the roof while I took the picture, not too mention the change in perspective. Once on the roof, I realized I had to move the seat up 8 feet. I found that funny because when I was riding my real bike, I could tell if my seat was off by only 5 millimeters. And, surprisingly the image was too big for my camera, so not only did I have to tile the picture, but now I had to deal with the lens distortion and vignetting. Lastly, in the final composite, besides normal retouching, such as color correction and erasing the odd marks, I also deleted the cars in the parking lot. If only I could erase the cars in real life 🙂

I’m still surprised this turned out so well. Thanks again to the students, staff and parents of Poplar Creek Elementary for helping to arrange this, especially Associate Principal Larry Lueck for the brilliant idea for this photo, Principal Jane Gennerman for her support and arranging the kids from small to big (falling uphill) along with Kate Krzysik and for her idea of having the kids illustrate the book.

Spanish Edition:
Cayendo Hacia Arriba:
El Secreto De La Vida.
With all new illustrations by the Elementary Schools of Argentina with the U.S. Department of State.

Scott could also visit your school or non-profit organization as a guest author to sign the books and answer questions. Meeting Scott in person inspires students to dream, and help instill the faith that big dreams, like cycling around the world, are really possible. The books make great gifts for friends and family. 70% of the proceeds go to the school plust a set of books for the school library. More info >>>

Equipped with his five senses, man explores the universe around him and calls the adventure Science.

Subscribe to our newsletter and get occasional updates on new games, activities and articles.